Have you ever been on a dating site and all the man has written in his profile is ‘Fill this in later.”

What was that?…you’re married and you’ve never been on a dating website? Fair enough. Let me catch you up…there are some men on there, not too small a number, who put a place holder instead of bothering to write a thoughtful list of features that might allow a single lady to properly assess what’s on offer. And all I think it: lazy bastards. It takes two minutes to throw up a photo and what these men are hoping, I have thus far assumed, is that the messages and matches will come pouring in off the back of that blurry, thumb in the corner, is that tomato sauce around his mouth, picture.

But here’s the thing. I’ve had ‘coming soon’ written on this About Me page for quite a while. The website equivalent of ‘fill this in later’, and for the first time (in my life? maybe not but definitely this year), I’m not sure what to write.

Elsewhere on the Internet, I’ve built a reasonably popular blog. By reasonably popular I mean millions of views a year and for the large part, save the occasional post about hair removal and knee surgery, it’s not an especially personal site.

Sure, I mention the divorce and the former legal career and then I get back to telling people how to find the best beaches in exotic locations or other such highly impersonal topics.

What’s given me pause when writing  this About Me page is how much do I wave my arm in the air and say – hey, all you who know me over there, dashing from airport to airport, usually with a bit of loo roll stuck to my shoe – here I am, over here, in all my behind the scenes, inner-workings of my fretful minded grittiness. Here you’ll find the personal stuff. I’m putting it online. Ok, well, not all of it. Everyone has to keep some part of themselves offline (I could easily segway into dating sites again here but I’ll steal myself…for now).

Anyway, where was I? Oh yeah, the should I or shouldn’t I put my name to this site and my more private side of life.

After weeks of procrastination.

And trying to avoid thoughts about ‘authenticity’.

I’m telling you all About Me.

Who? Oh, right. Yeah, after all that, you’ve never heard of me, have you? And you’re starting to wonder about the size of self-inflated ego. Because, if your passport isn’t the first thing you’d hunt down in a fire (above your family and pets), you probably won’t have the foggiest who I am. So what was I worrying about anyway?

In that case, let’s start this About Me again. Let me introduce myself properly. 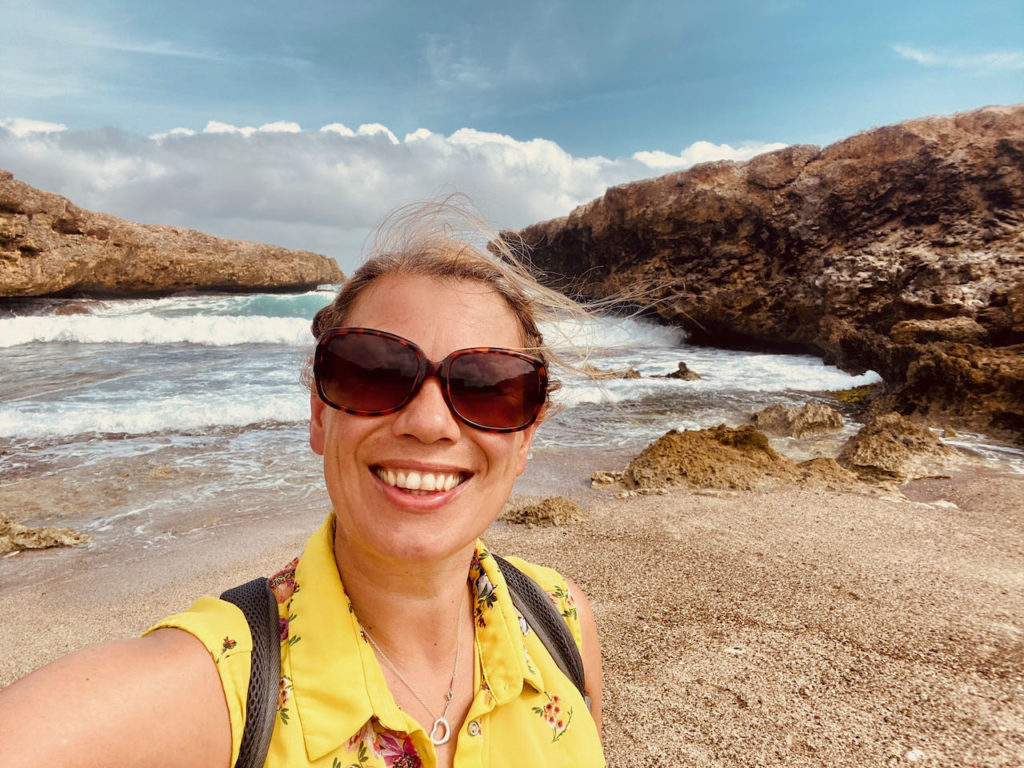 The middle is a reference to my hitting middle age and all the messiness it seems to entail.

I suppose my blog name could also be a reference to my messy middle, literally, because, let’s face it, unless you’re a ripped mid life instagammer who chews down 20 kilo weights for breakfast and regularly says hashtag ripped, your stomach, you tummy, your middle, does look a little bit messy by the time you pass your forties. Mine certainly isn’t as neat and trim anymore. And that’s without having had kids.

Oh, so that’s a bit more about me. I’m 45 on my next birthday and for one reason and another…and another, I skipped the procreating part that most people go through in their 20s, 30s, and sometimes 40s. I’m sure there will be more on this at some point.

What have I been doing instead? Well, I have collected a lot of passport stamps and yes, I know that’s not quite the same. But I’ve also created a few online businesses. To me, that is the same. They are my babies. Judge me if you will. * notes down another blog post idea *

What am I going to write about here? That’s kind of a work in process. I’ve shared a bit about why I’m here in this post. The main focus of My Messy Middle is going to be a lifestyle blog about navigating mid life. But most of all I want this to be a positive space because, when I googled middle aged women to see what was already online, the first post was from a very popular health website titled: Mistakes Women Make In Middle Age. And I thought, well, fuck you…sorry, let me add to the list above:

Back to that article: who else is sick of being a) a woman and b) not a woman of youth and c) being told (probably by a man) that despite wisdom being your only defining feature, since beauty left the building in your late 30s, you’re still fucking in up. I couldn’t even bring myself to read the article. I hope it was just click bait, with positivity when you got there. But all the same – urgh.

I have no doubt this site and its content will morph over time but at the moment I want to share some of my non-travel related thoughts. I want to talk about health (in a positive way), work, self-development, dating, relationships, friendships, death, illness, loneliness, anxiety, depression, yoga, meditation, books, recipes, coffee. So much coffee. With cake.

Not yet sure if I’m worth bookmarking? Here are some of my thus far ramblings over on my ‘other’ site on turning 40, how to eat out alone, female sex tourism in Africa (for the record, NO) and grief.

Look, I’m nobody special. I’m just a normal woman who, somehow, somewhere between a trip to Spain in my 20s and coming back from a few months in Central America last eyar, I apparently got old. Old enough to be middle aged, anyway. And it’s terrifying me.

What you’ll find here is my thoughts on ageing, but I want to hear yours too. I want to know if you’re also googling saggy boob exercises at 3 am (why always the 3 am googling?), whether you’re having an existential crisis (and are you doing anything about it?) and whether you prefer to look in the mirror without your glasses on because your face looks that bit smoother and, admit it, you can rarely remember where you put your glasses these days anyway.

There will be a few things I won’t talk about, because I can’t. I won’t have empty nest issues because I filled my nest with countries and high-fat snacks. I can’t talk about how to keep a 20 year old marriage alive. I couldn’t keep mine alive for five minutes (though subjectivity allows me to allocate the blame elsewhere for that).

So, that’s kind of it. Drop me a line if there’s something specific you’d be interested to read about. Or if you just want to say hi.

Now I’ve filled this in, I feel compelled to add, ‘Will update later’.